Road rage is without a doubt an increasingly dangerous problem. With smaller instances of road rage, there sometimes comes that infamous “note”, aka “the windshield note.” Apparently, windshield notes have become a common (and popular) way for drivers to communicate with each other, especially when they are trying to avoid those not-so-friendly confrontations or having to rely on your auto insurance company to take care of any damages left behind. Let’s take a look at these hilarious notes that people found on their vehicles!

Well, yes this is quite sarcastic. However, it seems as though whoever wrote this note was in good spirits. Because hey, why dwell on a terrible parking job when you can become a movie star, even if it’s for a couple minutes.

“Less expensive than having it towed.” Okay, this is true but how considerate can it be to smear peanut butter over someone’s windshield? Apparently whoever left this sticky, but tasty, note was upset and had a lot of peanut butter in their car, or at least near by. When in doubt, let it out (with peanut butter).

Here’s a windshield note influenced by 2012’s hit pop song Call Me Maybe by Carly Rae Jepsen. Try reading the note without singing the song, it’s not as easy as it seems.

What a knee slapper this one is! It’s a bummer just to receive a handwritten note, but a note written in paint that covers your entire windshield, well that’s just no fun. At least it isn’t peanut butter!

Stranger, Not So Danger:

No need to get your panties in a bundle, because this harsh note has quite the fairy tale ending. As soon as the stranger read the note, they immediately replied with an apology note, plus an envelope filled with quite a generous “I’m sorry” compensation.

Stranger, Not So Danger

Here, we have one of the more intense notes left on a windshield. This person sounds scarier than an angry Chuck Norris!

Straight to the point with this note. Not much more to say, except #THEPARKINGCHRONICLES.

A poetic masterpiece gone wrong? Nah, let’s keep it just the way it is and appreciate it for all it’s beauty, grammatically correct or not.

Who can get upset with Mickey Mouse? Not sure if Mr. Disney would approve of his cartoon on this card, but look how cute he looks even with his little middle finger in the air.

At least ‘Z’ started the note with thank you. Saying please and thank you is always a must, even if you have a big blue truck to park.

It’s my world and everyone else is just living in it. Possibly this terrible parker’s license plate?

Again, not much to say here. Seems like a very good reason to not get a ticket.

If Facebook disapproves, then we know it’s serious. And from what is else is written on the note, I don’t think this driver should park near this person ever again.

Ouch! Being compared to a child who can’t stay in the lines doesn’t feel so good. At least they refrained from cursing with their sarcastic note.

The combination of a typed note and a diagram, a very thought out diagram, probably indicates that you have pissed someone off. Exhibit A (see image below). However, as crazy as this note may be, at least there is a helpful diagram showing the driver exactly how to get it right for the next time. 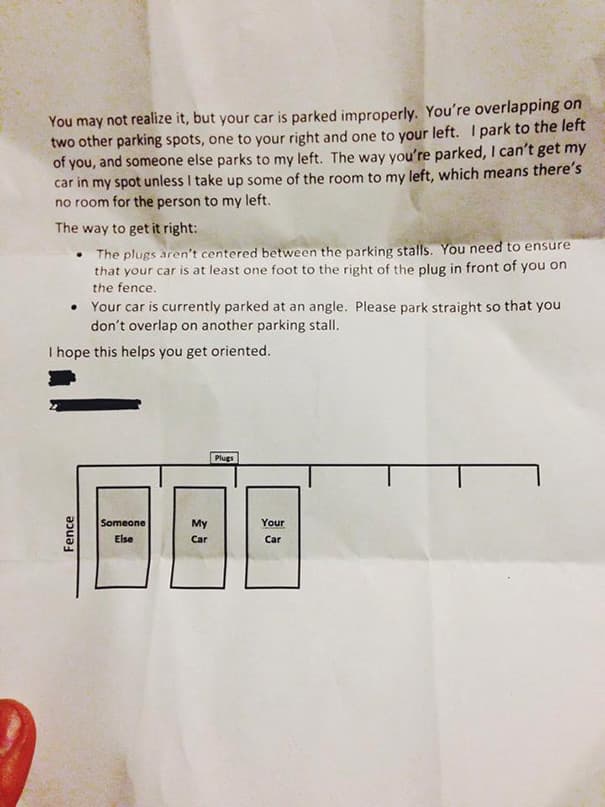 Too Tired To Tow:

When the yawns start to kick in, all you can do/think about is sleep. He may be a terrible parker, but today, he’s also a lucky parker.

No, no, no. This just isn’t right! though as a Chicago native, I can admit that when it is THAT cold outside, and shoveling is necessary, your brain tends to shut off and hey, an open spot is an open spot.

Dear Mr.Note Writer,
If you are going to write such a harsh note, please take into consideration that we are in a school parking lot. Next time you leave a note, let’s try and keep it PG. Thank you.

If this parker doesn’t understand how he can be a better parker after seeing this diagram, which includes instructions, then he should at least have the steps to showering down; “Lather, Rinse, Repeat.”

Comparing this guys anti-theft car system (the functionality or lack of) to the Jurassic Park era is pretty clever. I guess if you are trying to tell someone that something is dated, then yeah, why not reference dinosaurs.

If Tony says that the car bump was not his fault, then it’s not Tony’s fault. I don’t know, but if this note was left for me I think I would just give in and pay Tony…just saying.

Seems like Mr.Speed Racer has very considerate, but tired neighbors. Waking up at 7:30 am by no choice of your own is definitely far from ideal.

Nooo, the last part of this note is just every person’s nightmare. “May the fleas of a thousand camels invade your armpit.” Overall this is just super uncomfortable and not okay on many levels. 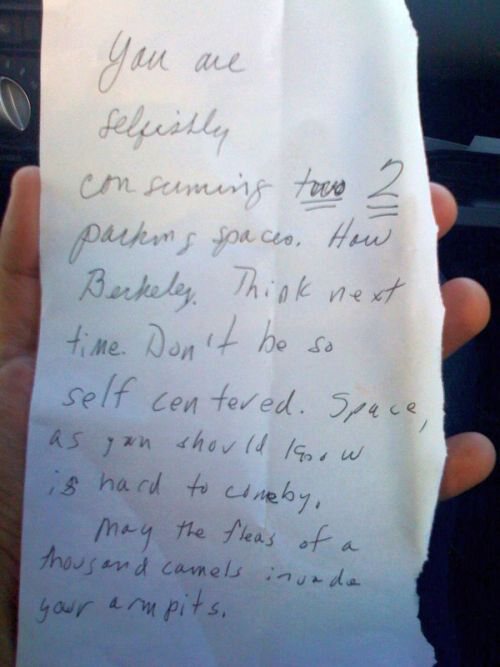 No Bad Park For You:

No Bad Park You

Getting one note is bad enough, but getting two notes, well yea that’s double bad. The alarm is not only bothersome to the community, but it’s also considered “noise pollution.”

Comparing a person to a pig? Well, that isn’t very nice or relevant to the situation. On another note, this guy just landed himself a new nickname, “The Parking Pig.” Don’t forget to always look at the bright side of things.

Aren’t you just clever Mr. Jack from Budget. However, I will admit that I do dig your style and, I most likely would have done the same exact thing. But still, you hit my car and that’s not cool.

If this doesn’t hurt your heart, then clearly you are not an ice cream lover. In addition to being really annoyed with someone who double parks, you now have a cone with melted ice cream sitting on hot day! I really can’t think of a more “wah, wah” moment. RIP ice cream, I’m sure you were delicious.